Reprinted from the Chronicle of Glens Falls 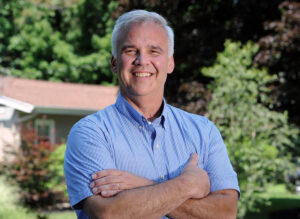 He faces a prospective Republican primary challenge in June from Doug Beaty, an at-large county supervisor from Queensbury.

Candidates in November will include Democrat Claudia Braymer, who represents Glens Falls’s Ward 3 on the Warren County Board, and Evelyn Wood, former Republican Thurman Town Supervisor, who plans to run on the new SAM Party line.

Republicans outnumber Democrats nearly 2-to-1 in the 114th district. State Board of Elections statistics show 39,960 Republicans and 23,310 Democrats.

Mr. Simpson, 52, who is also in his third year as president of the Adirondack Association of Towns and Villages (AATV), is in his seventh year as Town Supervisor.

He said he first grew up in Bolton, where his father Joe Simpson was a teacher. His mom Sandra was a registered nurse at Glens Falls Hospital. He said his father and Tim Smith started New Beginnings on South Street in Glens Falls, which became the Open Door Mission.

After the family moved, he graduated from Hoosic Valley High School in 1985, and started Matt Simpson Dry Wall in the fall of 1985. He said he worked in high-end homes on Lake George and in Queensbury for more than 30 years.

He said that while working on a home in Chester, he met his wife Judy, who was working at the Stewart’s in Chestertown. She is now assistant manager of the store.

They have two children. Matthew graduated from Paul Smith’s College and works in Vermont. Sarah is a certified nurses aide and “wants to be an RN,” he said.

Lived in GF & Qby before Horicon

The Simpsons lived in Glens Falls and then, from 1994 to 2007, in Queensbury. Then they moved to Horicon.

In 2009, Mr. Simpson says his relative Paul Smith was highway superintendent and asked him to be a plow wingman.

“That was my first experience in town government,” he said. “I was at the bottom of the food chain, and I got to work as part of a team. It was a great experience.”

“He was a hunter and fisherman like me,” he said. “Ralph asked me if I’d like to join the Zoning Board of Appeals. So I started going to Town Board meetings, but there were other people who were interested in the position and I didn’t get picked.

“The next year, Ralph asked me to think about running for the Town Board, and I was kind of interested, but I was still focused on running my business. But I ran in 2010 against two incumbents who were both from Horicon.

“I didn’t know anything about campaigning, but I knocked on 800 doors that fall, and the passion that the people I met had made a real impact on me.”

He won, served on the Town Board for two years and became involved in the Adirondack Local Government Review Board.

“I got more involved in Adirondack Park Agency matters through the relationships I built there, and then became involved with AATV. I was on the Town Board for two years, and Ralph told me he was thinking about retiring. So I ran for Supervisor unopposed in 2013 and was elected.”

Then, the baptism by fire began.

“I had a lot of things I had to experience. I had to learn how to develop and create a budget using factors that are largely out of your control, like sales tax.

“I developed my first budget and got a great understanding of how conservative you have to be. There are a lot of factors you can’t anticipate.”

He said Horicon has grown during his tenure as supervisor. “The Lazy Moose opened up, EZ Marine, and then the Hub really changed Horicon. There are great biking opportunities in the Adirondacks, and that caught us a little by surprise. But biking brings a lot of people into our region, and [Hub owner] Drew Cappabianca has great new ideas.”

As an aside, Mr. Simpson said he and his wife had their wedding reception in the former Town Hall, which became the Hub. “Guests brought dishes to share,” he said.

He said he quickly realized that “the greatest challenges affecting our community were outside of Horicon, and I had to be out and about. I became more involved at the County and in the Adirondack Park.

“I’m an outdoorsman. I call myself an environmentalist. There is a balance between us living here and protecting the asset that brings visitors to our region.”

Being president of AATV “gave me a new opportunity to work in Albany with the Governor’s Office and both houses.

“From my opportunities as Town Supervisor and through AATV, I worked throughout the district on many issues that affect residents of the 114th Assembly District,” including wastewater infrastructure and the timber industry.

“I love my job as Horicon Town Supervisor but I always thought if I had an opportunity to seek higher office, I would.”

Can he convince voters in Glens Falls and Queensbury to vote for him?

“I worked in the area for 31 years,” he said. “I know a lot of people from Glens Falls and Queensbury. My grandfather Ellsworth Simpson worked in the textile business at Binches, and I developed a lot of relationships there and have a lot of friends there. I lived there.

“I am known in Glens Falls and Queensbury. I did drywall in thousands of homes.”

Mr. Simpson’s top three issues? “High taxes, and the way our money is spent. Infrastructure, and wastewater and clean water issues. And economic development tied to the ability to support businesses.

“We don’t need a hand out. We need a hand up. We need to be sustainable to support families and bring the economic development that we need. There needs to be a major paradigm shift in what we’re doing now, to ensure taxpayer money results in the intended benefit.

“I’m also focused on affordable housing for working people within the Blue Line, something the APA can help with.

“I’ve seen the revitalization in Glens Falls. They have figured out how to attract and retain the right businesses for the people who live there.”

Previous PostHoricon CEO awarded for promoting purity of Adirondack waterways
Next PostSimpson Receives Major Endorsement
This website uses cookies in order to offer you the best experience on our website. Please click ok to accept our cookies and continue on to our site.Ok